Delighted to receive an early copy of the November/December 2017 Kindred Spirit magazine with my reviews of 20 decks.

Some decks were beautiful and easy to engage with and one or two I did find challenging, but I hope I gave a fair and accurate account of all the decks. 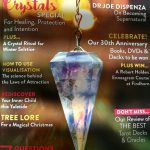 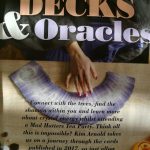 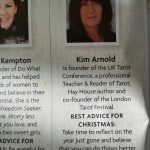 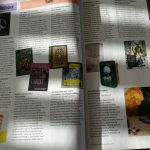 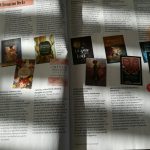 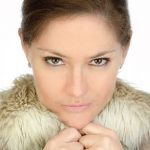 Sasha was born just after midnight on a chilly Halloween night.  Sasha received a BA in Literature and Religion and began her work with tarot. She conceived and produced tarot events at The Metropolitan Museum of Art and The Morgan Library and brought the tarot community behind the scenes with curators and educators. Rare Visconti, Marseille and Minchiate cards along with uncut Italian card sheets were unveiled. These treasures, previously shuttered in museum archives and unavailable to the public were examined and considered in a modern context.  Sasha is proud of her Tarot Outreach Program. Sasha’s first ever of it’s kind outreach was developed for New York City’s at-risk, inner city youth. Working with kids who were transitioning out of the foster care system, Sasha used tarot and symbol as the igniting point of nurturing personal intuition. She taught that trust in oneself can be rebuilt. Sasha is the author of Llewellyn’s Tarot Diva, 365 Tarot Spreads, 365 Tarot Spells and served as editor and contributing writer of Lo Scarabeo’s Tarot Fundamentals, Tarot Experience and Tarot Compendium. She is currently working on Llewellyn’s Complete Guide to the Rider Waite Smith Tarot, hitting shelves in 2018. She is creating her first tarot deck with Marvel and Disney artist Mirco Pierfederici, The Haunted House Tarot. It will be released by Lo Scarabeo in 2018.

Friday: Tarot and Your Shadow Self  & Saturday:  Romance and your Highest Self 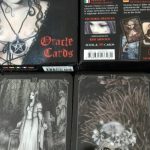 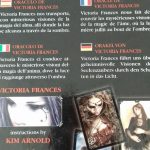 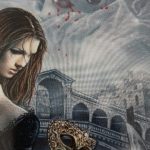 When I was first approached to write the accompanying book for this deck I was thrilled, however, on receiving the images initially my heart sank (stay with me), some of the images I found distressing, but I had committed to write, so no turning back.

Working with this deck was very different from any other, it taught me how to react and work with the darkness which often lurks within each of us. Of course we don’t talk about this, preferring to pull a nice fluffy angel card or something more familiar out of our Tarot decks for guidance.  As I worked with each card, with every one of the 36 cards I spent in quiet contemplation, I would sit quietly, observe and look at the voice within each of them and take note of what was going on beyond the images, intuitively I would be guided to the meaning of each card, some I struggled with, but I realised, this reflected my own struggles, the images make you work at facing your fears, and love or loathe them, Victoria Frances is one very talented artist.

This may not be a deck you would naturally be drawn to, but I feel that for self development there is not a better deck on the market. There is also a meditation to help you get started.

Half way through working with the deck I was ‘given’ the Arch Spread which is detailed in the accompanying book::

Much of this deck works with light and dark, it guides and advises us to appreciate that where there is darkness the light is not far behind.

Of course I highly recommend this deck, as the author, I know how much love, soul searching and effort went in to this.

(Please note for signed copies the seal will be removed) 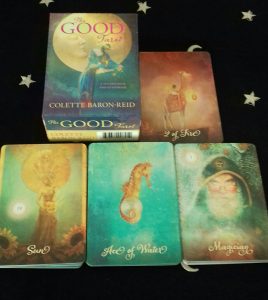 My first impression of this deck is that it is half way between a Tarot and Oracle deck. There are 78 cards, and the suits are divided in to Earth, Air, Fire and Water. My initial curiosity was to flick through the cards to find Death and as I thought, no Death but Transformation. 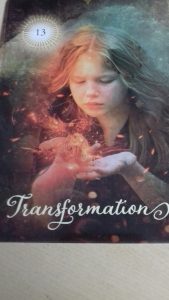 The borderless cards are beautiful and nice quality, but if you are looking for a traditional Tarot deck then this does not tick the boxes.  There is hardly any visual reference to tarot symbolism, this is explained later in my review.

Each image is gentle but as a traditional Taroist, I did find them hard to read. For me, I would have to read the images intuitively rather than connect them to the traditional card meaning, as if you know your Tarot, the image does not always relate to the card number , for example 5 of Fire V’s 5 Wands, visually I just don’t get it! 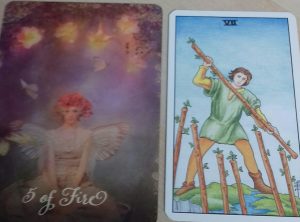 The guidebook is well written and Colette actually mentions that the deck was a calling from spirit and this clearly comes through in the images.  I love the fact that each card has a meaning and an affirmation to work with, I think this would be helpful for some clients.  Colette writes that she was guided to do things differently, in a non conformist way and it will take time to get use to working with them.  I agree with this, but I must reiterate the cards are beautiful, and it is good to see something new hitting the Tarot shelves.

Take a look at the cards, if you want something different then invest in the deck, certain cards will call you as they did me, in particular for me The Magician.  This deck will stretch your imagination and make you think outside the box, as a reader this can only be a good and positive thing.

A couple of years ago it was decided that instead of buying Grandma a Christmas present we would travel to a European city and have a few days away, last year we went to Berlin, this year Prague.

We drove to Grandma’s the night before, Martin as always equipped for travel, had his supply of clear see through bags as we were only taking hand luggage.  He explained to Grandma that all liquids must go in the bag and taken out when going through security.  Great, all sorted, I took one of Grandma’s clear bags and she had a bag with a lipstick and face powder, so far so good.  We arrive at Gatwick and go through security, Martin and I glide through, Gma gets pulled over, her luggage held back.  Half an hour later the security guard was still pulling cosmetics from her bag, I was waiting for a cricket bat, rubber chicken, kitchen sink etc. to appear, as it turned in to a scene from Air Plane!  Oh Christ I thought here we go, as Grandma walked away from security she was twittering something about … well I am an old lady I need A lot of cream ha ha, bless her.   The 9a.m. flight was fine, all on time, but I have to say Martin and I were stunned when ordering a coffee Grandma ordered a Heineken, they say to watch the quiet ones!

We arrive in Prague, the car was not waiting as it should have been, then bloody Gustuv turns up and piles us in to a van with other people, did you hear me OTHER PEOPLE!!  It was supposed to be private hire, well he was not getting a tip.

The Hotel was stunning, Unitas was full of history. A baroque church next door, where you can hear the chant of the convent a place where its history tells amazing stories of the Jesuits, the Grey Sisters of St. Franciscus, Communist Secret Police who took over the building with its infamous prison. The president Vaclav Havel and H.R.H. Prince of Wales have stayed at the Hotel.  Well if it is good enough for them …….  The energy was powerful and peaceful.

Prague is a walking city, and every corner you turn there is something else of interest, as you may know I do love to shop, but this time it was to the dulcet tones of Grandma saying ‘where she gone now’ lol.  Needless to say my spending was well under control!

The next day we took a bus tour of the City.  The guide as lovely as he was, was cross eyed, now, I am not making fun but it was very distracting when he said to look left and his eyes went right.  I found it hard to look at the sights as I was quite fascinated by him.  Our Fit Bits recorded 17000 steps on day one, we decided to rest with a drink at the Easter market, bursting for the loo it got quite complicated when I ended up in the restaurant kitchen and could not find my way out.  The Easter Market was lovely, lots of colour and noise, a real buzz about his place. 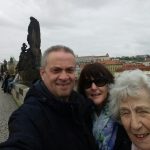 Friday it rained so we went on a boat trip, there are many Russians in Prague and they don’t queue like us Brits or have a sense of humour it seems.  An elbow fight commenced with me and pushy man as I was not giving up our spot.  Martin laughed as he said the determination of me nearly pushed him in the river, well that would have been a shame lol.   We came off the boat to pick up the bus, only to have our crossed eyed guide waiting for us, honestly you couldn’t make it up, now we all had the giggles. 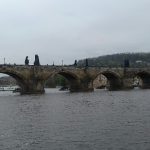 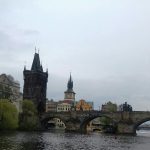 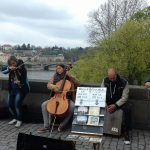 One negative about Prague was the food, nothing was hot, and the choices were a bit odd, I ordered a coffee in a restaurant which was almost cold, so I took it back,  the barista look at me as if he had scrapped me off his boot as I complained, and he duly stuck his finger in my drink (I have to admit I thought oh f*ck please don’t give it back to me) but I held my stare, he agreed it was cold and duly made me another cold one, and before you think it, no I was not that brave to take it back a second time.

Our last night we had dinner at an Italian, the only real decent meal of our stay, we got a bit tipsy as Grandma and I almost got run over by a car backing in to a space, can I put on the record I saved Grandma from death! We walked to the Astrological clock as it struck 9p.m. (yes we are stop outs) the 12 Apostles moved around the top of the clock looking down on us, then everyone cheered, well not us, they need to get out more.

Prague is beautiful, in fact one of the nicest Cities I have been to, the people are lovely, the place is stunning and the beer and wine is cheap.  The Churches and holy buildings dot around the city, which is interesting as apparently 60% are non-believers or atheists, I know that because the cross eyes tour guide told us.        If you get a chance GO, you will love it. 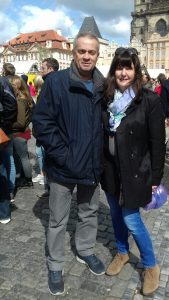 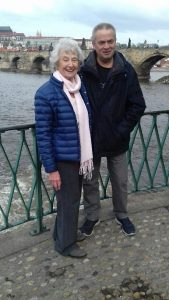 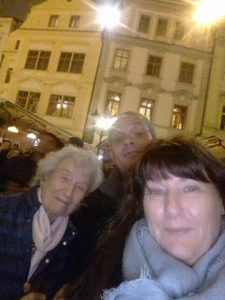 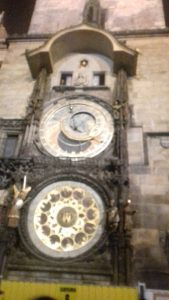 "I wanted to give you a million thank you's for not only having me teach, it was such an honour, but also for all of your kindness once I arrived. It was a wonderful experience. You're conference was warm, inviting, respectful and full of heart and love. It is and was everything we would hope that tarot can be when we all get together."

"Once again a successful conference. I am always so inspired after each conference. It was good, so many interesting and generous people there and I look forward to see everyone soon."

"What a great & crazy (in the best possible sense of the word) bunch of Tarot lovers at the UK Tarot Conference - can't remember the last time I've have laughed and learnt so much during two days."

"It was a wonderful conference! Kim as the Magician/Empress/Hierophant really provided us with an unforgettable experience!"

"It was my first conference and I would just like to say a huge thankyou to Kim for organising such an amazing event. I met some really wonderful people and I think it will take me until the next conference to assimilate all the learnings!"