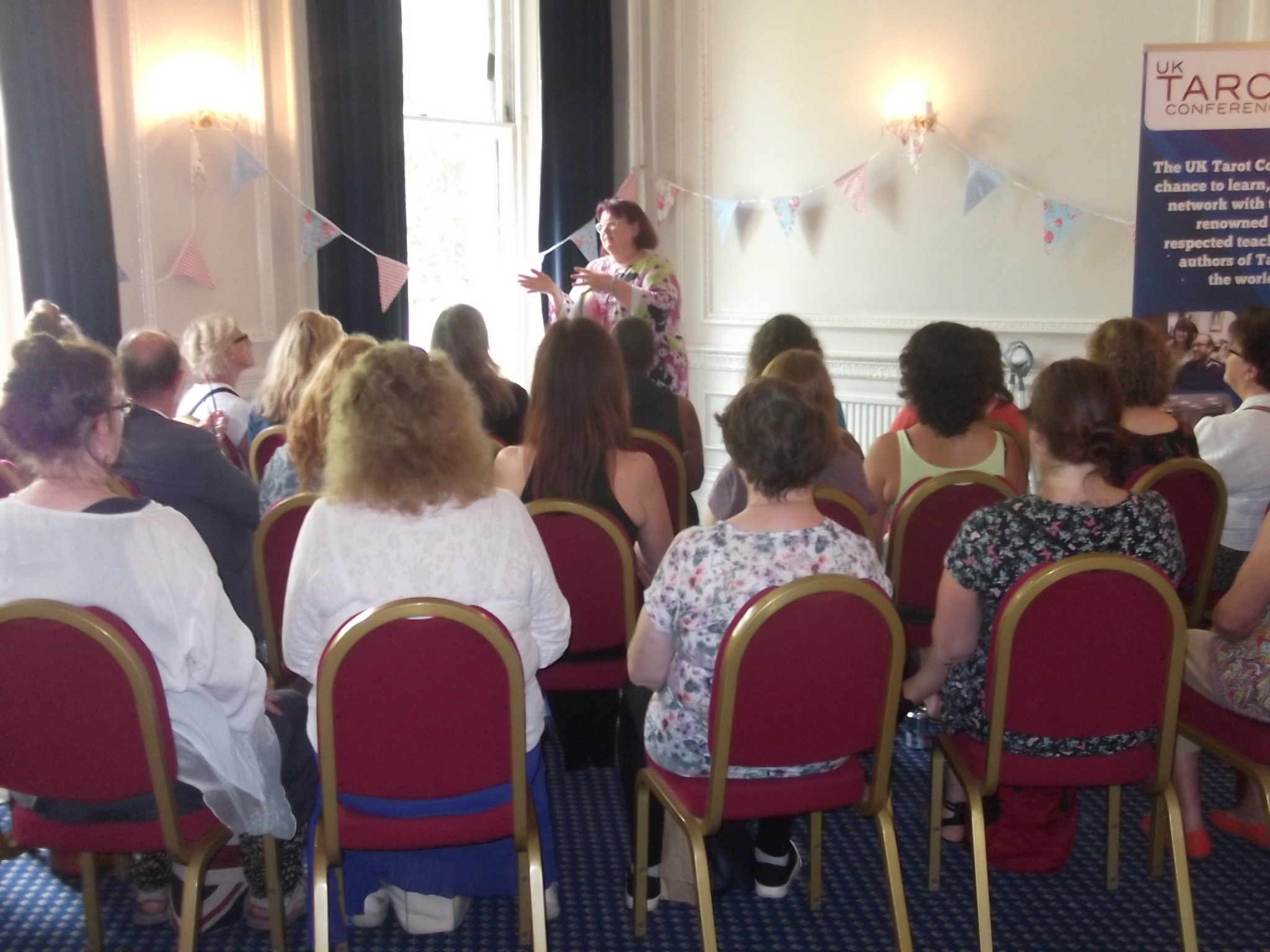 Probably the hottest day of the year, but the room looked lovely.  Bunting provided by Bali decorated the room, our little display of Pamela Colman Smith laid out, and the stall holders and readers arrived in plenty of time to set up.  Bali made an announcement that the doors were now open and for everyone to enjoy the day.

We had decided that the talks would start at 11a.m. as most people came in to the City and this would give them time, however, within 30 minutes of opening the door we already had a crowd, Geraldine and I had both written workshops in case of emergency and I decided to host mine at 10.15 titled Reading Tarot as a Psychic.  Free workshops were in the main hall, and about 25 people gathered for my interactive session where I taught a technique to show people how to realise their true potential and listen to their intuitive self.

Geraldine’s workshop was also needed as the Dream interpretation lady did not show, I was not bothered, Geraldine Beskin talks are always inspiring!  As the day gathered pace people continued to flow in through the doors, the full workshops opened with Chloe McCracken talking about Tarot Magick.   I looked around the room, the readers were constantly busy, the aura stand had a good flow of customers and the stalls including Atlantis, mine, Watkins books and Rhiannon Faulkner Tarot were surrounded by people eager to buy and learn more about Tarot.      Then Israel Ajose walked through the door, “Oi Israel” I said “If I knew you were coming I would have had you talk” bless him, “ok I can do that for you, how about ……. Tarot and sex Magick” ……. it was announced it would only be a 20 minute impromptu talk, “Its a quickie Kim” he said “story of most women’s lives” I retorted!  Needless to say we had to bring in more chairs!

Midday Maria Antoniou from the Brighton School of Tarot talked about Ancestral Healing with Tarot, unfortunately I could not attended the talks as I was too busy being a helicopter organiser, but I heard people talking about Maria’s meditation which apparently was wonderful.

Richard Abbot was next on with ‘Embrace your Sovereign Individuality with the Tarot’, Richards workshops are always good, I have heard him speak many times at the Conference and he always presents new material and an interesting way of teaching.  Cilla Conway talked about the Byzantine Tarot, people were drooling over this beautiful deck.

Music played in the background, the Tombola donated by the generous Llewellyn drew the crowds (everyone was after Ciro’s deck) and the room was lively with chatter.

Nigel and Angela did a talk about Auras whilst Richard’s workshop was in full flow, there was activity everywhere in the room. The readers all handpicked still having people flowing for guidance.

The lovely Rhiannon used her charm to guide people through her workshop ‘Looking at the people cards’, in other words working with the Court cards followed by Jackie Woodward Smith who hosted her workshop ‘Archetypes & Revolution, how Tarot Supports us in times of change’.  Every workshop was packed.   We literally could not fit in another person.

The final workshop of the day was with David Goddard an experienced teacher of the arts.  And to close, we had a demonstration of Clairvoyance with Alex Bayley and Jan Harris.  Alex opened his session with a description of my grandfather, I was a little embarrassed as the organiser getting a message through but of course spirit goes to where they are needed.  Both are very talented clairvoyants.

The only downside of the day was the heat, we had the doors open to the balcony overlooking Hype and fans working their little socks off, but  it was still  so hot.  Next year I think we will aim for May but rest assured the Tarot Festival is born and look out for information about 2016!

Thanks to everyone for their support, the first of anything is always a risk, but the stand holders/readers and the lovely people who joined us for the day put their faith and trust in us and I truly believe we delivered.

That’s all for now, but hope to see you at the Conference in October.