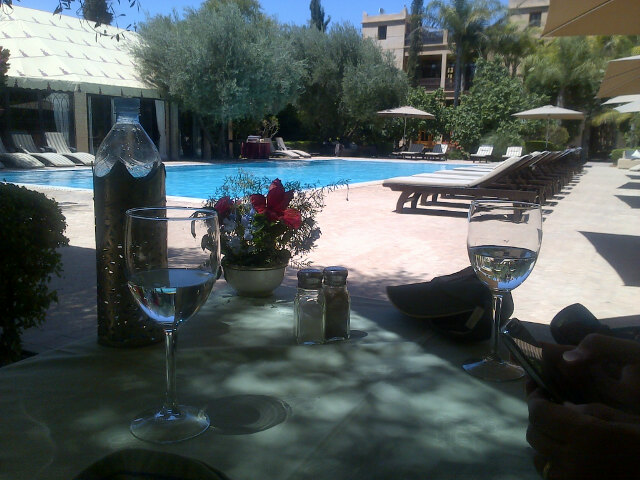 Here I am in the beautiful Marrakesh, it is 35 degrees, the hotel amazing and the staff attentive, professional and adorable.  We decide this evening to visit a restaurant recommended by the hotel. it’s a short taxi journey and they tell us that when the taxi drops us off we will have a 100 metre walk to the restaurant, Foundck but the driver will escort us.

We leave out hotel and the taxi driver asks “Parlez-vous français?” (me) “Oui un peu”, and he blasts off talking in what may as well be Swahili!!  “aucun aucun anglais” and he switched to perfect English (bastard).  We take 15 minutes to negotiate the price of the journey, already he tries to rip us off, but luckily we know approximately what the trip should cost, all agreed we go on our way.  Now, if you have ever seen Homeland, when the leading lady is in the middle of a busy Arab town surrounded by the heat and dust, women head to toe in Burka’s and the men busy doing nothing except standing in groups, this is exactly how is was, the Taxi stops, he tells us he can take us no further, and within seconds the taxi is surrounded by people banging on the window.  Discussion goes on between the taxi driver and a man, taxi driver tells us this is his friend and he will escort us the 100 metres down the road.  Reluctantly we get out, the man is quite chatty, behind him a small group of men follow, we get almost to the door of the restaurant and I hand him a small note equivalent to a couple of ££’s, he screams, “what is this” and aggressively demands more money, a large sum in fact. it was terrifying, he was still being abusive as we walked on, then something snapped, I would not be bullied at home, so why am I letting him speak to me and Martin like this here.  I turned and walked directly to him, squared up and gave him the biggest mouthful of his life, the adrenalin had kicked it, the conversation ended with me saying …… and you can now f*** off!  He stood there stunned, in shock probably thinking that a mere woman would dare to speak to him like that.  Anyway, we went in to the restaurant and I was shaking like a leaf, now we were worried about leaving the restaurant and walk the same route to get our taxi back, would he be waiting?  We need not have feared as we were escorted by the bell boy back to our cab.  It certainly was an experience.  Never going ‘off piste’ again, it is far too stressful.

Still, even that will not put me off going back to this amazing place.  I really did love it, I do struggle with the male dominance and how submissive the women are, but then I suppose if you know no difference, then that is how life is.   Different cultures indeed, we are so blessed here in the west!