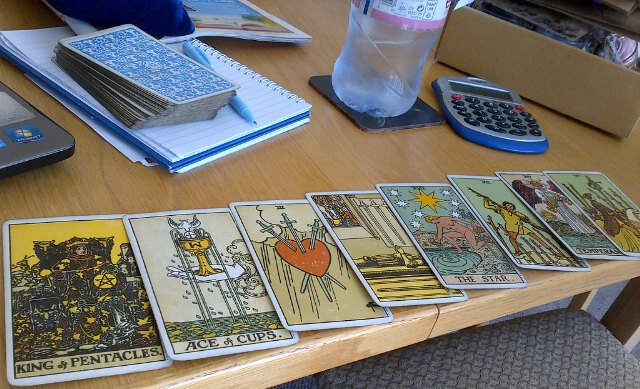 People’s ignorance about Tarot never ceases to amaze me.  Just when I think we have dragged Tarot in to the 21st Century someone tries to spoil it.   My attention was bought to a Blog today written by a local book seller, I will add the link to his Blog at the end of my Blog although I am not that keen on promoting him.

It is true of course, that Tarot was originally a card game (Tarrochi) and it was during the 15th Century that there is clear evidence that Tarot was being used as a divination tool.    Tarot was then used by the wealthy as only they could afford to create the decks which were often based on family members. Decks were originally hand painted until around 1480 in France when standardised versions of cards began to appear. (I could write pages about this but just trying to get a point across).

So where does this notion of someone else buying you a Tarot deck come from?  To be honest like him, I have no idea, probably because it is made up,  I owned a shop for nearly 15 years and never have I come across that, thank goodness really or I would have been bankrupt if I waited for a ‘friend’ to come and buy for a friend.  The ignorance of the role, history and use of Tarot by those who choose not to learn more and be negative never ceases to amaze me, it seems to me this guy has written this Blog for the sake of something to write.    I guess he also never walks under ladders, carries a rabbits foot for good luck and waits for two magpies to appear before continuing his day.   I now have an urge to check out Amazon, I feel the need for a new deck of cards coming on!

Do feel free to make your own mind up