Review of the UK TAROT CONFERENCE  2010

The 7th UK Tarot Conference took  place over the weekend of the 8th and 9th October at the Thistle City Barbican,  this year had a true international appeal with Mary Greer from the USA, Hermann  Haindl – Germany, Laurent Langlais – France and Ina Cüsters-van Bergen from the  Netherlands. 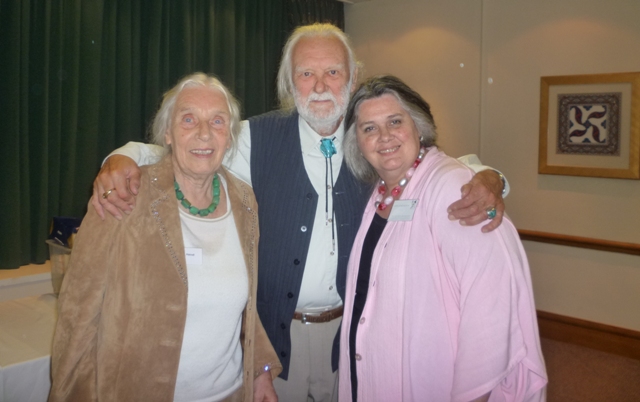 Our event started on Friday afternoon  with Mary Greer hosting a ‘Tarot Council’ session, this was limited to just 20  people to maximise their interaction with the tarot.  I was not able to  attend this session as I was preparing for the evening event, but the feedback  was excellent.  At 6.30p.m. the Conference officially began. Mary Greer  hosted the opening session called ‘Prediction or Insight?’ we looked at how our  readings are perceived, are we ‘just’ fortune tellers, or do our readings go to  a deeper level. (Of course the latter was the main consensus)!  This was  followed by a wonderful hour with Hermann Haindl, although Hermann does speak  English he did his talk in German and we had a fabulous interpreter, Michael  Fuch’s on hand to keep us fully informed of Hermann’s words.  Hermann  talked about his life, from the day he was born, to his time as part of the  Hitler youth, and his years spent in the army, being captured by the Russians,  and being held as a prisoner of war.  His artistic gift saved his life many  times (too numerous to tell but although this was a sad period of his life,  Hermann’s animated talk had us laughing out loud, he is a wonderful story  teller). In 1986 he was inspired to paint the Haindl Tarot, this took him 2  years and was originally only meant to be a major arcana deck, however, with the  support of his wife Erika, a 78 card deck was completed and has gone around the  world in several languages.  Hermann’s talk was perfectly rounded off by a  film of the creation of the Haindl deck, this was moving and inspiring.   Following the end of this session complimentary wine and cheese was served so  that likeminded souls could mingle and chat.   Our auction rounded off  the evening perfectly with the sale of a deck of Greenwood tarot and a few of  Hermann’s signed prints (I have the Empress which is beautiful)! 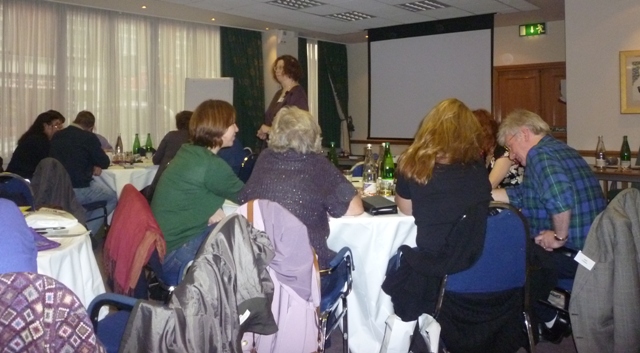 Saturday opened with myself, Mind  Mapping and Tarot with Kim Arnold. We each created a mind map, then added a  Tarot card on to each section therefore adding layers which posed further  questions and guidance on our particular issue.  An interactive session  which created many unexpected scenarios too many questions.

After our morning coffee break, our  next session was with Mary Greer and ’21 Ways to read a tarot card’.  Mary  talked about the process in her book by the same title.  We were encouraged  to look at the psychological and philosophical experience of the card we choose,  (mine was 7 pentacles). By combining new ways and techniques to read a card  enabled us to define a style of reading, therefore, developing new techniques,  we also did an ‘arm test’ similar to kinesiology to decide if an issue was more  or less important that we thought.

Our successful ‘Table Top Tarot’  sessions at lunch time, with Trudy Ashplant hosting “A Journey with the Masters”  and Tarot & Numerology” with Richard Abbot were well attended and loved.

After lunch we began with Jonathan  Dee, a lovely man, both knowledgeable and entertaining, he went through a brief  history of tarot and he explained how the Italians read the major and minor  cards separately and do not acknowledge reverse meanings (sounds good to me)!     Our exercise was to separate our cards in to major, minor and the 4 Aces.   First, you shuffle the Aces and lay them vertically in a straight line, then you  shuffle the major arcana and lay 8 further cards, one each side of the aces, you  now have 4 lines of 3 cards with the aces in the centre.  The suit of the  Ace represented the influence, the card to the left – your hopes and fears, and  the car to the right, what is going to happen.  This was a brilliant  reading and kept everyone busy, the room was loud and bustling with laughter and  chatter.   We then moved on to an astrological spread using 27 cards,  which proved quite challenging on the tables as we were running out of space.   Some abandoned the table and moved to the floor for room.  As an  astrologer, Jonathan took us through the meanings of each house and how this  influenced the positioning of each card. 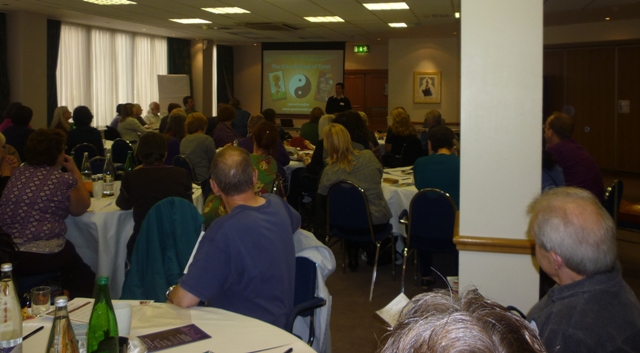 After a much needed afternoon coffee  break, we were immersed in the fusion of Feng Shui and Tarot with Laurent  Langlais.  Laurent explained that Tarot is a map of Chi (energy) and  through his very professional executed Power point and hand outs we were taken,  on a journey through tarot many of us were not familiar with.

Finally, a perfect end to a busy and  packed couple of days,  the conference closed with a meditation by Ina  Cüsters-van Bergen. 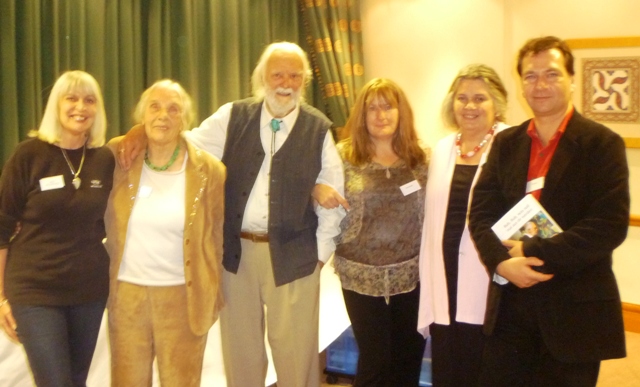 The packed merchandise stand was  hosted by the fabulous Geraldine from Atlantis Book shop in Museum Street  London.  Atlantis have an extensive range of tarot, if you are in London do  go and visit.

This was altogether a fascinating  weekend with the most interesting and valuable opportunities for learning  available to those who are already on their journey of discovery into the tarot  and wanted to know more.  2011 is already in the diary for 14th 15th  October,   I can’t wait!