Review of the UK TAROT CONFERENCE 2013 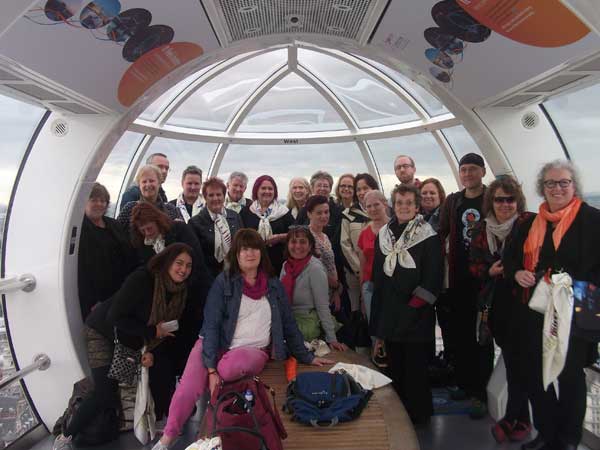 Being the 10th anniversary we decided to honour this major anniversary.  Twenty Two lovely people joined us on Thursday 10th (do you see a theme) to celebrate the Wheel of Fortune by gathering together at the Freemasons Hall in Great Queen Street, followed by a private pod on the London Eye, our very own Wheel of Fortune.      Many of us gathered in the Freemasons Arms in Long Acre for a quick bite to eat before we started our tour.  At 2p.m. we made our way across the road to the Freemasons Hall, our guide, took us on a tour of the building.  Unfortunately, no photo’s allowed, but everywhere you looked there were subtle references to tarot.  Central to the building is the Grand Temple, you enter this magnificent room via the Masonic bronze doors.  The Temple is breathtaking, the ceiling cove is of mosaic and in addition to figures and symbols from Masonic ritual includes, in the corner, figures representing the four cardinal virtues – Prudence, Temperance, Fortitude and Justice.  We clearly see the chariot and many references to the Rider Waite deck

From the Masonic Lodge we made our way to the London Eye, our lovely Geraldine Beskin from Atlantis Bookshop had worked tirelessly to put together 22 major London landmarks and marry them up with the major arcana. Atlantis, generously gave everyone a London scarf, if you see the photo’s you will see us all wearing one, something to wrap our cards in once the Tour was over.   As the Eye turned, Geraldine pointed out places and facts which were fascinating.  I can’t share with you the connections, but we are hoping to put this on an MP3 download in the near future.  Once off the Eye we headed in to the café for tea and to regroup and get ready for the rest of the tour.  We stood outside the café looking directly at The Houses of Parliament where Geraldine had more facts for us.  Then we began to make our way back to Bloomsbury, however, the weather started to cave in and the heavens opened, so we hailed a fleet of black cabs and made our way back to Atlantis where Bali had already put the kettle on and laid out the room ready for a virtual tour. (Yes we had plan B).  After Geraldines fantastic talk, we opened the wine and enjoyed the buffett and enjoyed many hours of new friendships being made and lots of chatter and laughter.

Friday 11th October – Carnival of Cards with Kim.  We do not usually start the Conference with a Friday morning session, but as so many had stayed overnight for the Tour we added this last minute.  About 20 people turned up for this impromptu session, where we looked at ancient spreads and enjoyed practicing readings with new and adapted spreads on new friends.  We finished with a channeled meditation using the Magician Card as our centre point.

As the conference got underway, I was busy preparing for the launch of Tarot Majors Tarot Masters book and cards I did not get the chance to attend full workshops.  Chloe McCracken’s session Combining Forces: Lenormand & Tarot Together compared how tarot and Lenormand compliment each other.  For many attending this workshop it was their first insight in to working with Lenormand techniques, the feedback was that this was a fresh (although ancient) way of looking at the cards.

Our evening event started with Carrie Paris workshop: Becoming a Card Curator: We learnt a technique for viewing imagery that the Greeks called, seeing with different eyes. This method adopts the eye of the artist and utilises four distinct levels of symbolic understanding; with each level bringing the viewer closer to infinite vision.  Fascinating!

Lyn Olds followed with her Letters to the Past project which launched in New Zealand 2 years ago. Twenty two contributors were asked to write a letter to a deceased person who had influenced Tarot. In just 50 minutes we travelled around the world as Lyn told the history of Tarot to present day. I did not want this talk to end, Lyn is a fabulous speaker and so knowledgeable about her subject. Our talks finished around 8.30p.m. when we launched the book and cards created for this event. Once again wine and nibbles flowed, we talked tarot and mingled with friends old and new.

Saturday morning we laid up a table for the goodie bags, you have never seen so much generous stuff for our attendees, kindly supplied by Llewellyn, Hay House and Lo Scarabeo.  After the wow factor of arms full of cards the day began.  We kicked off with Carrie Paris Join the Lenormand Revolution: Lenormand featured heavily in this years conference.  Interesting how Carrie’s and Chloe’s approach was different but with the same results.   Carrie’s Magpie Oracle is a real treat, if you get the chance have a look, they produced wonderfully accurate readings.

After morning tea break we listened to Caitlin Matthews workshop – Tarot & Ancient Cartomancy Skills, using in some cases forgotten techniques,  Caitlin bought readings back to life.  I walked around the room when people were doing readings under Caitlin’s guidance and everyone was buzzing

We had two lunch time workshops with Alison Cross and Ina Custer-van Bergen.  I did not attend these as I was busy but the feedback was great.  Chloe McCracken has written a review which I will share at the end of this for more insight and information.   Both workshops had great feedback

After lunch, Lyn Olds hosted a workshop entitled ‘Three Card Draw’, what a laugh, you had to pull 3 cards for a reading then deconstruct them by physically drawing your own card using images from the 3 we had taken from the deck, this became your 4th card.  If you go to our face Book page ‘UK Tarot Conference Group’ you will see mine, put it this way I don’t think Ciro has much to worry about!  (sorry, but horses are hard to draw, in fact so hard I went to change my cards and got caught so was made to stick with what I had). 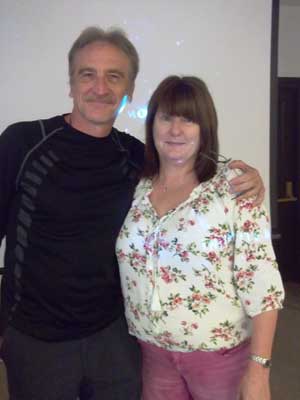 Finally after coffee, Ciro Marchetti did a brilliant visual presentation, such talent and what a lovely man. Ciro talked about how his decks evolved and why.   Needless to say I purchased 2 decks of his after his talk (doh)!

Finally, as our wonderful conference drew to a close, I finished with a Wheel of Fortune meditation which had been channelled to me a few weeks before.   Using a Ferris Wheel as our centre point, I believe everyone got something out of this

This was in my opinion the best conference EVER, the rest have been pretty fantastic, but there was something special about the energy at this event, hard to describe unless you were there. Time to close, but put the 10th 11th October 2014 in the diary, this year we raised the bar, just wait and see what we have in store next year! Kim Arnold

I would like to thank you for a wonderful day on Saturday. I came out of the hotel feeling uplifted and rejuvenated. Everybody was warm and friendly and the atmosphere particularly this year was special. The fact that I won the raffle twice added to my state of euphoria! Thank you for your warm welcome.  KB

Hope you have had time to rest and recover after the amazing Tarot Conference you organised.  I really enjoyed it.   Thank you so much I have made more new fab friends and it was wonderful to see old ones too. The Idea of the tarot packs and books were inspiring and well done for having your book published by Hay House congratulations! NK

A BIG THANK YOU for a fabulous, fabulous conference. It was a magical time and I met some wonderful people, old friends as well as new (and very talented) people. It was also great to see you again and the only problem was that it all whizzed by so quickly.

I’ve gained so much knowledge and so many great ideas were gleaned from the conference, one being that I keep a running notebook of events, stories, quotes etc and I’ve decided to take a leaf out of your book and dedicate every note book to a Major Arcana card and my current notebook is dedicated to The High Priestess. Thanks once again, take care of yourself and have a good rest and look forward to seeing you next year.      BM

Just wanted to say for my first tarot conference I had an awesome time on Saturday.  Thanks so much. I felt I learned so much from everyone. Can’t wait to come next year!!    HT 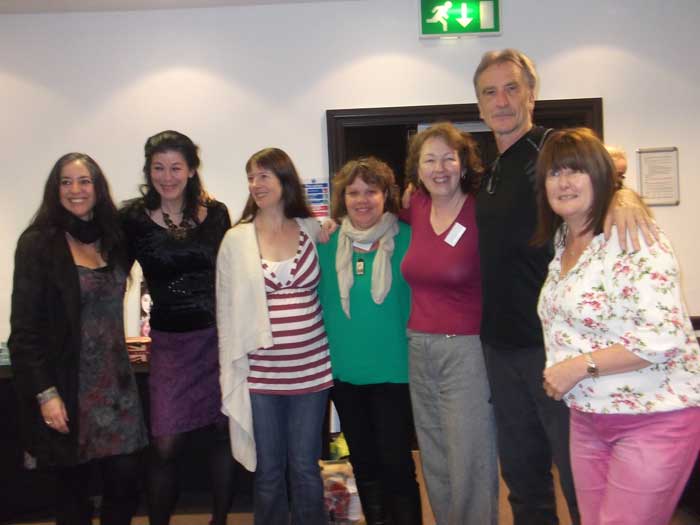