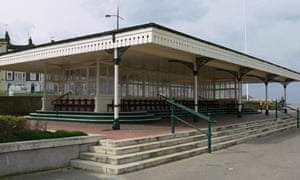 I only recently found out that this very shelter, about 5 miles from where I live, is where T S Eliot wrote some of his famous lines from the Wasteland.  In 1921, after suffering a nervous breakdown he came to Margate to recuperate, in this very spot he allegedly spent many hours pondering and writing.  I don’t think the extract below was the actual part he wrote whilst he was here, more likely the part about poverty, Margate has long been known as a dump. However, this delapidated shelter looks out to sea, and in the evening you will see beautiful sunsets so famously painted by Turner. I am sure the sea air and warm summers played a key part in his recuperation. I can remember as a child spending many happy summer days on the beach just metres from this shelter.  Margate has been through some tough times, and is now under regeneration with some wonderful results, in fact it is becoming trendy again.  However, it does seem a shame that one of the greatest poems written in the 20th century does not have any recognition here in Margate, more likely to have his name etched through a stick of rock than a celebration plaque for all to see.

I can’t claim to be a Margate girl (actually I wouldn’t want to lol) as I was born in London, but my family moved here when I was a child and it was a thriving seaside town.   I am now curious to find out more about this famous poet and his association with the Town.  So why is this written in my Tarot Blog? Read on, a short extract from The Wasteland.

The Waste Land   1 The Burial of the Dead (Extract)

Had a bad cold, nevertheless

Is known to be the wisest woman in Europe,

With a wicked pack of cards. Here, said she,

Is your card, the drowned Phoenician Sailor,

(Those are pearls that were his eyes. Look!)

Here is Belladonna, the Lady of the Rocks,

The lady of situations.

Here is the man with three staves, and here the Wheel,

And here is the one-eyed merchant, and this card,

Which is blank, is something he carries on his back,

Which I am forbidden to see. I do not find

I see crowds of people, walking round in a ring.

Thank you. If you see dear Mrs. Equitone,

Tell her I bring the horoscope myself:

One must be so careful these days.

One thought on “Margate and TS Eliot & The Wasteland (who knew)”