Visiting Thailand has been on my wish list for as long as I can remember. Martin seriously pulled it out the bag as a surprise Christmas present.  I could not believe I was finally going.   Even the 11 hour flight was easy when I found meditations on the in-flight entertainment, this was going to be a good week! 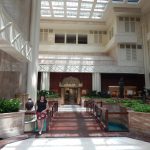 We arrived at the Shan-gri La hotel, to be greeted by committee of people all in traditional Thai dress, each had hands clasped in prayer position and bowed deeply to welcome us, I do admire those who come off a long haul flight looking like they have stepped out of a spa, not me, I looked like I had been dragged through a hedge backwards, they must have thought the Arnold’s are in town lowering the tone! The hotel was breath taking and they could not do enough, our luggage disappeared already  in the room by the time we had checked in.  When we arrived in our room, the window overlooked the River of Kings, wow, we had not even done anything yet and I was already overwhelmed. That evening we took the water taxi from the hotel for a Thai meal in a traditional restaurant, I had the Imodium’s at the ready but all was good.  With a 7 hour time difference we fell in to bed exhausted, day one had gone too quickly, tomorrow we begin the adventure of a lifetime. 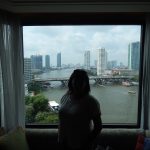 Tuesday we took the water taxi to Wat Po, the home of ‘Phra Buddha Saiyas’ more commonly known as the Reclining Buddha. The river taxi in itself is an experience, the Thai people are so tiny yet have mouths the size of foghorns, and in case you don’t hear them shouting that ‘the boat no sink’ someone thought it a good idea to give them a whistle.  I don’t think I am exaggerating when I say there must have been a million people on the boat, well maybe a slight overestimate, but you could not get a piece of paper between us, and then more people continued to get on, the London tube has nothing on the river taxi!  The Reclining Buddha was huge I have read much about it but when you see it for real it is breath-taking, It is 46 Meters long and 15 meters high.   After seeing this amazing sight Martin was even more overwhelmed when he discovered sherbet ice cream, more about Martin later! 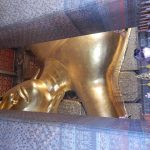 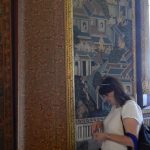 From here we went to the Grand Palace in Wat Phra which housed the Emerald Buddha, something strange happened here, I became very emotional, I had no control over this at all, I had an overwhelming feeling of being very blessed, but very much thinking of my family and friends back home, I said a silent prayer and just immersed myself in this peaceful spiritual energy. Later, back at the hotel I had a foot massage with the lovely Thai masseuse who was set up for business around the pool, digest this piece of information because it becomes funny later on!   Later after midnight, jet lag is in full flow, we are wide awake sitting on our 12th floor window seat watching the lights and boats on and around the River of Kings working hard through the night. The lights shine brightly.  Bangkok does not sleep. 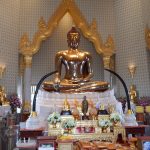 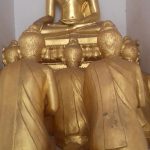 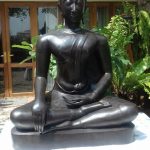 Wednesday we went to see more Buddha’s, each one more spectacular than the one before.   I never get tired of Temples and Buddha’s.  That afternoon we got the sky train to the shopping centre, as a seasoned shopper I know the prices of most things.  How much do these people earn? I kid you not double UK prices, I really thought everything in Thailand would be pennies, I came back with a packet of wet wipes. We ate in a local Turkish restaurant that evening, a scruffy café where the food was excellent. It is very late and still 30 degrees. 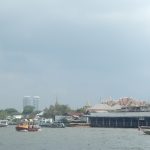 Thursday we got the water taxi to Wat Arun, a dinky little place full of temples, and a place where many Buddhists Monks live and pray.  I loved seeing the monks walk in their orange robes. Martin and I strolled along the pathways, beautiful flowers scented the air, nooks and crannies everywhere, as we walked along one particular path, I saw a red door slightly ajar with the word ‘meditation’ on it, I pushed it quietly open and glanced in to see monks chanting in quiet mantra, it was serene and moving, I stood silently at the back just watching, unbeknown to me, after what seemed like a minute, Martin followed me in with as much grace as a clumsy Mr Bean, the noisy bastard got his camera strap caught on the door handle, nearly strangled himself, then as he unhooked himself fell through the door, with a loud whisper (like that made a difference) of ‘oh shit’, all he needed to complete the moment was to fall on a drum kit and he would have finished the job. We quickly left, and we walked back up the path at speed. 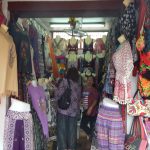 Now we are in a giggly mood as we see a few market type stalls selling clothes, Martin sat on the wall and watched as I went in to have a look.  The Thai lady said ‘its ok I have big to fit you’ if she said it once, she said it a hundred times, seriously she was that close to getting a smack in the mouth, she then got a tape measure to show me how big she could get. I kid you not she saw me the size of a marquee, no I protested, that is too big for me ….. ‘no it not, you big lady’ was her reply.  Bitch! We left without buying.     We made our way back to the hotel for a few hours round the pool. Martin has been getting leg cramps for some time, the massage place around the pool where I had had a lovely foot massage a day earlier was still there.  After much persuasion, he agreed to have one if I went and booked it. The tiny Thai lady was not there, a man in his white uniform sat on a chair wearing sun glasses and appeared asleep, I stood there, nothing, I nudged him on the shoulder, with a sarcastic tone of ‘sorry to wake you’, …. Yes speak, he said. Anyway, Martin had his foot massage and came back and told me the masseuse was blind……..  no he wasn’t, I said, he was asleep anyway how do you know that?   Firstly he fell over my sandals and secondly he had blind man glasses on and a white stick on and thirdly he WAS BLIND …..  and …. it is normal for a masseuse to hit you with a stick?  Well he nearly had to call an ambulance for me, I laughed and laughed, poor Martin, his first and last experience of a massage.  All week beautiful Thai girls and he got a blind man who hit him with a stick and charge him ha ha ha ha ha ha. 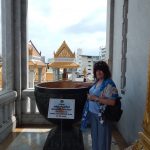 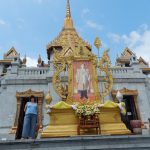 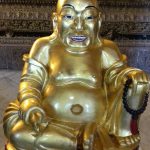 Friday we went to see the Golden Buddha, the taxi driver had never heard of this national land mark, (it is like saying Buckingham Palace), anyway stupid taxi driver dumped us in China Town and told us to get out and drove off.  We did not know where to go, they speak very little English. We did eventually find it after walking miles and it was well worth the effort.  To complete our Thai experience we decided we would get a tuk tuk back to the hotel. 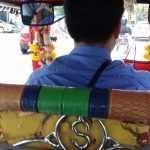 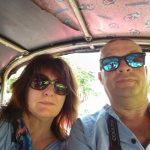 We negotiated with the driver and off we went at 90 miles an hour, in the middle of a very busy highway Martin screamed NOOOOOO STOP, the tuk tuk driver hit the brakes and I am shouting what’s wrong????  His bloody Westgate Cricket Club hat had blown off and was being run over by cars, oh god it was funny, Martin got out of the tuk tuk, dodging cars to rescue his grubby hat, thankfully retrieved now all is well in the world again. The tuk tuk driver thought it hilarious which made it even funnier.    That afternoon I went for a walk alone, bought silk dressing gown ended up with full body massage in a very dodgy ‘parlour’ I think we will leave that story there.  That evening I said to Martin I was fed up with Thai food and we realised we had only had it once lol, but we found an Italian restaurant on trip adviser, it was the best ever but cost small fortune!  Our last night we went  out back door of hotel and found a million  bars and restaurants we did not know were there all at half  price … who knew. 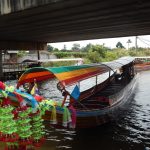 Saturday, our last day, we went on long boat to floating market and got drowned with water as the miserable git of a boat driver hit the waves at speed, he kept shouting at me and Martin in Thai, we had no idea what he was on about but put it this way he blew his tip! We saw the city from the river, where old Sian meets new Bangkok, poverty and money entwined in one great city.

Our short time in Bangkok was wonderful, it ticked every box I had,plus more, we laughed, I shed tears of overwhelming emotion, the Temples touched my soul and I will never forget my time there, I will go back in a heartbeat. 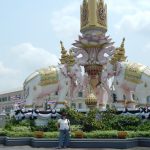 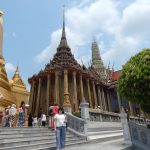